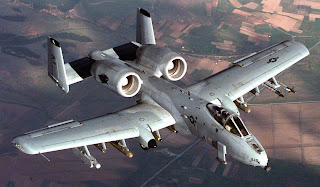 QUESTION: I've read up quite a bit on the thunderbolt II, but I've yet to find any solid information on the individuals who pilot them. what kind of training they receive. (versus a standard fighter, which I know the a-10 is not)

ANSWER: Only the man-beast which are the offspring of the angels which descent from Valhalla once a year and true Men are chosen for that, and they don't even need the training, they know it by the instinct, and the stallion of the sky, the untameable A10, is as tame as a little kitty in their hands, once they riding them, they become one with each other and form the most terrifying weapon known to man, a fully operational A10 in the sky, and then they chew ass and kick bubblegum while repelling ICBMs for breakfast and wrestle with bears for afternoon tea.

ANSWER #2: The A-10 is the pinnacle of aerial weapons technology. With an effective range of over 50 miles when equipped with ATS Maverick missiles and its heavy Gatling Cannon, it is unparalleled in the ground attack role and is immune to all ground-based anti-air defenses. Its fuselage is specially built such that up to 30mm autocannon rounds will merely scratch the paint off the tungsten-carbide exterior armor shell, and point defenses ensure that even theatre-level AA systems such as the Patriot missile will be destroyed.

In addition to it's ground attack supremacy, multiple hard points allow for ATA Sidewinder missile packs to be attached. In conjunction with its main cannon, the A-10 can engage and defeat any modern or future air superiority fighter or interceptor with its speed and armament. The A-10 simply cannot be shot down or disabled, not even by fuel - when the fuel reserves run dry, the A-10 can continue to run its engines on the embedded solar panels in the wings, allowing it to continue its mission anywhere on the planet.

The A-10 is the apex of strategic weapon design, and our fielding of it in7685098 Iraq has guaranteed victory for our troops.