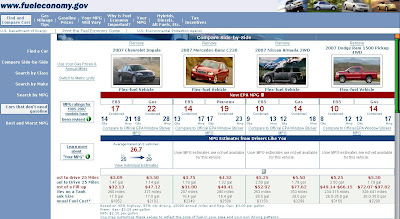 Apologies for the screen shot, but there is no way to direct link to the page.

The EPA now have the figures for vehicles rated to run on E85. (located here)


I should point out something on the Dodge 1500 truck. Yes, it is the 4WD model. The 2WD gets exactly the same. Also, it isn't the 5.7L but the 4.7L. The5.7L wasn't listed. I should also point out that is only the 1500 series. The EPA doesn't even look into the 2500 and 3500 which get SIGNIFICANTLY worse mileage. Ford and Chevrolet's trucks are equivalent.

Of all the vehicles listed the Impala/Monte Carlo boast the highest mileage figures while on E85.

Of the 30 vehicles (several are the same model with a different wheel base that I didn't count) three are by foreign manufactures. I shouldn't even count the Town Car, Crown Victoria, Marquis as separate cars nor the Relay, Uplander, and Terraza clones.

The EPA shows that a good 30% reduction is to be expected. (just as everyone with half a brain figured) Expect the same with your cars power.