There was an article on The Truth About Cars a few days ago reviewing the "new" Chrysler Aspen.

It is a great article. I suggest you find time to read it and the newly formed "Chrysler Death Watch" but I digress.

Several of the commenters went into a rant about how this vehicle isn't badge engineered.

I don't see how they came to this conclusion.

Just look at this thing. 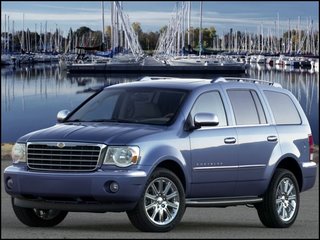 Now compare it to this... 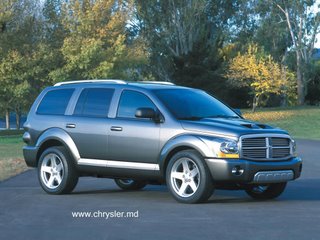 Other than the tail lights and grill what is different? It is the Durango with $10,000 more on the sticker price. It even has the Caliber's interior.

Even the name says "late to the game". When is the last time you have seen an Aspen?

How is that NOT Badge Engineering? (Other than the 1980's Aspen thingy.)

I can only think of one more horrid example of badge engineering and that would be the Trailblazer/Envoy/Rainier/Bravada/Ascender/9-7X.

Would a sane person market the same vehicle six times in the same class so they can compete against each other? Can anyone tell which is witch? Although to GM's credit they are not going to update the Trailblazer for 2010. They opted to discontinue it all together. Plus they don't make Oldsmobile anymore and don't import Isuzu and stopped that "Saab".

On that note might I suggest the "General Motors Death Watch" series that is also at TTAC.com

I guess dumb stuff like this is the reason the big 2.5 are is such deep poo.

The "Domestic" manufacturers are not the only one that have this practice. The Toyota Camry was called the Holden Apollo in Australia up until a few years ago. The Euro-Accord is actually a Acura TSX. But I guess GM, Ford, and DCX are the only ones that rebadge a vehicle and sell BOTH in the same place. Or in GM's case 6 vehicles.

Next time I'll get into Mid-size cars and how several manufacturers should die if they actually had to sell their cars.
Posted by Tyler at 10/02/2006 02:33:00 AM