I'll be back tomorrow. I have a Bama game to attend.

Notes from the day: 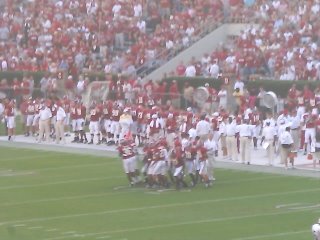 This is one of 17 pictures I took with a .2 megapixel camera (Notice the . is BEFORE the 2)that is built into a pair of binoculars. I should have brought the good camera.

John Parker Wilson (WTF is with three names?) made some dumb mistakes, but did an alright job. Well, if by alright I mean over-throw an open receiver near or in the end-zone three times. Alright?