Not In a While.

Take the quiz:
what type of car are you?

Muscle Car
you like it fast and loud and want everybody to know it. u have raw muscle under the hood

I haven't written a good mean spirited rant in quite a while. And after taking a few of those dumb online tests I realize how stupid people can be (again). But as you can see above my rant isn't (completely) political today.

I drive a Toyota Camry. I believe I have mentioned that before. It is the standard fare LE with a V-6. Although I have a lead foot (I wear Wolverine Boots) I average 25mpg (City). During a large part of the last year I only drive 400-700 miles a month. My Camry isn't a small car but it isn't huge either.

To get anywhere in my town US HWY 431 must be traveled. It is a main route between the largest residential area and downtown Huntsville. There are places along this road, as with most places, that are not large enough for vehicles to travel parallel. 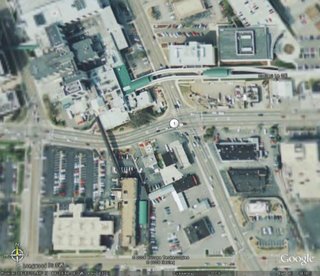 Case in point. In this image the road curves to clear Huntsville Hospitals main building. The lanes are adequate east of the pictures intersection, but below that walkway the lanes are only 45% of adequate. A very tight squeeze for small cars near impossible for trucks and impossible being side-by-side with a semi.

All this setup (finally) brings me to my point. Why do people drive super huge SUV’s?
(Why are they called SUV’s? They sure as hell aren’t sporty!)

Being a teenager in a time of 4-bangers being the new “Small Block Chevy”. My V-6 is bigger than I need but not bigger than I can use. I could live with an “economical” 4-cylinder if need be and I am actually interested in the new Yaris from Toyota. (10K for a new car with Toyota reliability. CAN’T BEAT THAT!)

I know people prefer the suv to mini-vans now. (Vans were the shit.) In most cases they are a lot more car then they could ever use.

I hate to sound like a commie here but how often do you see a “SUV” pulling a trailer or boat? Hell, or even occupied by more than one person? Most SUV’s still do not come with a trailer hitch standard.

Now don’t get me wrong. I have NOTHING against pickup trucks. Everyone needs a truck on some weekend. I just… fracking hate SUV’s.

What is an SUV really? Looks like a jacked up Van, or worse a STATION WAGON!

Now, from my perspective, I really like estate cars (wagons). The Subaru Impreza WRX is a sweet car. The Yaris is a hatchback, but falls in the same class. Yep, I weird, just ask my sister on that one. Actually, the first car I looked at (for my first car) was a wagon. You should have heard the reaction from my parents, uncle, cousins, and grandparents.
“Wagons aren’t cool. Don’t you want a cool car?” I drive a Camry. I either have no idea what this “cool” thing is or I have no imagination. A little of both I am afraid.

Back to point. People want to drive these vehicles. I under stand that. I fault them for that.

But I get okay mileage. SUV’s do not. My mother’s I-6 hellblazer TrailBlazer gets 18 on a GREAT day.

And no one in their right mind better say, “Well the V-8 trucks are faster.” because YOU are a moron.

What is it about? Status? A Symbol? Is that all it is? A symbol? Of what may I ask? Every body and there brother owns one so it can’t be a good symbol.

I don’t know. I’m all for people driving whatever they want, but it is now costing me for their choice. I find that unacceptable.