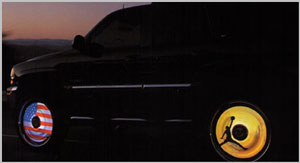 Have you seen the new dub wheels?

You've seen neon lights and spinning wheels on expensive, tricked-out cars, but Dub Wheels is rolling out their "Pimpstar" wheels that could become a fancy trend in automotive accessories. Powered by a microprocessor and wireless modem, the wheels are covered with color LED lights and can display images, text, digital photos. Dub said.

If you aren't part of the Rapper and basketball player crowd, plan on shelling out more than pocket change for installing LED wheels on you car. The wheels are currently selling for around $12,500 to $19,500 for a set of four.

That is one of the coolest things I have seen.